The Christianville Spirit: My Fascination with New Year's Eve 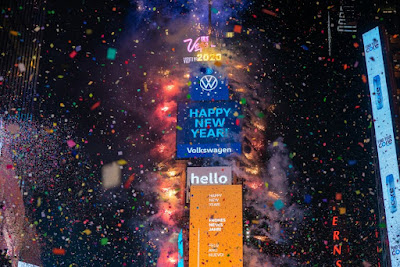 The Spirit that Creates New Beginnings

Well, My Reader! We have Reached The End. The End of My 700-Series of Newsletters! When It comes to Numbers, I pay a lot of Attention to Them and Funny Enough, Each Number has a Meaning! Where the Numbers gets Confusing to Me though is because There is Meaning for a Number in Single Form and a Meaning for The Number in Sequence. Usually, when addressing A Number Meaning, I usually look at The Number in Sequence. 7 in Sequence or 777, means that a Lesson has been Learned. So, Here’s a Short Lesson and Then, an Interesting Theory about Something. The Short Lesson being that Some of The Newsletter Numbers of The 700-Series; Being 737, 747, 757, 767, and 787, All refer to The Same Thing, believe it or not. They all refer to Types of Passenger Airplanes! The Most Commonly Known Airplanes (at least in My Opinion, Anyway) are The 747 and 787 Airplanes. I digress. Moving On!

For Those of You that may not know, I am a Newsletter away from My 800th Newsletter!

So, 800 Newsletters! Can You Believe It?! It is Milestone that each time I hit The 100 Series Mark, I cannot believe that I have made it that Far.

That must take a lot of Writing along with All The Times that I have taken off, Subjects Written about, and Life Events happening.

So, Let’s Celebrate! So, What shall I write about for My Pre-Lead into My 800th Newsletter? hmm...Lots of Choices! I have done some good lead ins. Among them, Here they are, along with References...

Which brings us to Now. So, How do I top This? Well, For The Pre-800th Newsletter. So, New Year’s Eve! Now, I realize that New Year’s Eve and New Year’s Day have passed already, 18 Days ago Today. However, I thought that as An Ending to The 700-Series, I thought that I would talk about Another Fascination of Mine! This Fascination deals not with Geography/Politics/History or Weather, but More about The Subject of Time.

So, Let’s Start with The Basics! What is New Year’s Eve and Why am I Fascinated by It?

So, What is New Year’s Eve? It is a Day that The Whole World celebrates. Heck, It is really the Only Day of The Year that literally The Whole World celebrates. New Year’s Eve, as The Name implies is Basically The Last Day of The Year, December 31st. People all over The World have Various Traditions and/or Superstitions that They do for New Year’s Eve. For Example, in Denmark, It is Good Luck to Break an Old Dinner Plate on The Ground. In Romania, You toss a Coin and Make a Wish! In Some Family Nations, They bang Pots and Pans to ward off Evil Spirits.

For Me, My Traditions are that, I have to make sure that I watch a Few Fireworks Show in Other Countries like Hong Kong, Dubai, and London. And, Check the “List of Banished Words for The New Year” put out by Lake Superior State University Every New Year’s Eve. Of Course, Ending New Year’s Eve Day, Watching The Last Sunset of The Year as well. Also, I have to make sure that The Tagline of My Newsletter for The Next Year is Solidified. In Other Words, It is Confirmed and Written down in My Records, both on Paper and “List of Taglines used” File on My Computer.

Making Sure that I know The Tagline and I know Who and How to give Credit to Said Person. The Last Tradition that I do, I Flip My “Day Markers” from December to January. My “Day Markers” were something I made in Middle School, Made on Strips on Construction Papers, with The Days of The Week and Months of The Year combined, I decided to make use of Them by, Separating Them and Using Them so, I know what Month it is and What Day it is. I make a Ceremony of It, when I flip them to The New Year. My Mom and I do a Countdown to New Years early and I can flip them and My Mom can go to Bed, as She tends to Go to Bed early.

But, My Fascination with New Year’s Eve, is not Just The Traditions but, The Timing of It all! You See, From a Young Age, I have always looked at The Calendar and It says The Month, The Day, and The Year. Then, The Calendars ends at December, like The Last Chapter of a Book and Ending at December 31st, It does not go Any Further than that. If You do go Further, You see The Wall! It is The Bottom of The Calendar. Then, I throw away the Old Calendar and The Next Day, We start on Top of The Calendar! So, in a Single Second on New Year’s Eve, We literally Jump Calendars going from 11:59 PM December 31st to 12:00 AM January 1st.

In My Literal Mind, It does not Make Sense that We go from The “Bottom of The Calendar” to The “Top of The Calendar” in a Single Second! After All The Excitement of Counting Down to The New Year in Real Time, I like to Rewind The TV to before 12 Midnight, usually when I am watching The Ball Drop on Times Square in New York. I watch to The Last Second, when The Screen Countdown says “1” and I mumble to Myself that is The Last Second of December 31st of X Year (aka New Year’s Eve) and Then, turn it on Again to Everyone saying “Happy New Year!” , mumbling to Myself again that It is now January 1st (aka New Year’s Day). How Amazing It is that You can Jump into a New Year and Start at The Beginning! In My Mind, It is that Figure of Speech, “Wipe The Slate Clean” taken Literally. The Slate of The Year has been Cleaned!

Hey! I can’t Leave You off Here! It would be like The Worst Cliffhanger! Of Course, There is New Year’s Eves’ Cousin, New Year’s Day to talk about! Ahh New Year’s Day! New Year’s Day (as The Name implies) is The First Day of The New Year and There are Different Traditions for This Day too. In Some Family Nations, You eat Certain Foods either after Midnight or on The Day itself. For Example, In My Family Nation, We eat 12 Grapes, One for Each Month for Good Luck. There is also a Superstition of Not doing Laundry on New Year’s Day, We did Two Years in a Row and It was Proven. It is literally The Only Superstition that I believe in, next the saying “Q” Word (aka “Quiet) in an Emergency Room, at Retail Places, or Food Places.

Anyway, After that is Done, I have to watch The “Tournament of Roses” Parade (Known Shortly as “The Rose Parade”) from Pasadena, California, usually on The Morning of New Year’s Day. The Perfect Way to start a New Year! And, Finally, Watching The “HGTV Dream Home” Special, Just to see Where the Dream Home is for The New Year! Sometimes, It is Somewhere Every Pretty! Other Times, It makes You wonder why They chose That Area. In Case, You are Curious where The HGTV Dream Home 2023 is, It is in Morrison, Colorado, A Town in The Front Range of The Rocky Mountains, Just West of Denver.

All in all, That is How I celebrate New Year’s and Why I am Fascinated by The Day known as New Year’s Eve! New Year’s Eve is a Fascinating Day that We can Celebrate All over The World, No Matter Who You are or Where You are from.

Thanks for Reading The Christianville Spirit. Start the New Year off Fresh! A Fresh Beginning!

Posted by Christian at 5:11 PM

Welcome to The Christianville Spirit! Your Guide to seeing through The Eyes of An Adult with Potocki-Lupski Syndrome (PTLS) known as dup.17p11.2 I believe that you will enjoy it and you will see The World through My Eyes!

Christian
Hi! My Name is Christian. I Have a Rare Chromosome Disorder known Medically as Dup.17p11.2 (Potocki-Lupski Syndrome or PTLS for Short.) I was 4th in The World and 1st in The United States to be Diagnosed with PTLS. Today I stand as the role model and inspiration of My PTLS Family. I am loved so much by My PTLS Family that I feel like I'm the Ambassador of The Family and The PTLS Union. I Love Road Signs, Maps, and Travel. I can tell you how to get alot of places. I really love Christmas because to see people happy during that time of year.