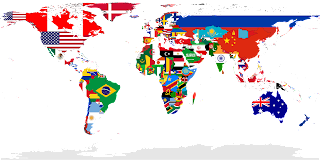 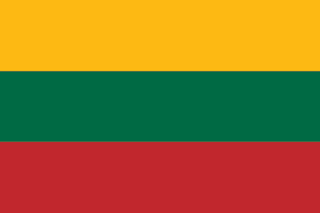 Labas, My Readers! Woah! Have never heard This Greeting before! Where is that From? Well, To Answer Your Question, It is from A Country with A lot of Unique, as I like to say.

The Greeting is Pronounced, “Ah-Bahs” and It is from Lithuania. Lithuania?! Where’s That? Well, I got a Geography Lesson for You. In A Second...

But, To Begin My 15th Year of Writing, First Off I would like Humbly Thank You, My Readers for Always being There to Read My Newsletters. Whether You just Found out that Your Child has PTLS, in which Welcome to The PTLS Family! Please Refer to The “PTLS FAQ” Newsletter before Continuing On. Or You are a Veteran, Who has been Reading My Newsletters since The Beginning, in Which Case, I Thank You so Much for Following Along! So, Just a Few Honorable Mentions before I continue. I did add Two New Things to My Newsletter Blog Sites! Some of My Geography Lessons and/or Geography-Related Newsletters in a Section that I am calling “Christian’s Geography Corner”.

I Hope that You enjoy that! Also, I added a Few Sites to My “Recommended Site List” including Geography Now!, My Favourite YouTube about Geography; Roadwaywiz, My Favourite Youtube Channel in The Subject of Roads! Listen to The Bridge Sounds in Certain Area like New York State, Florida, or South Carolina; And, Of Course, Adding in There, Expatsblogs, Expat Blogs from Around The World and Eurovision World, Form Those who want to Learn about The Awesome and Odd World of Eurovision!

So, On to The Geography Lesson!

So, I took a Cyber Drive from Stockholm (S) - Sweden and Down through An Area called “The Baltics”, made up of Estonia (Eesti) (EST), Latvia (Latvija) (LV), and Lithuania (Lietuva) (LT) respectively. It is called “The Baltics” because It is a Chain of 3 Countries along The Baltic Sea. Each Baltic Country is Fascinating in Their Own Way. For Example, Estonia (EST) got It’s Independence and Came together as a Country through Music. Amazing, Right? Latvia (LT), I found that The Architecture of The Buildings were Unique and It seems like a Heavy Forested Country. But, The Country that I was Intentionally Headed for on This Cyber Drive was Lithuania (LT).

As Much as I get The National Codes of Latvia (LV) and Lithuania (LT) confused, as well as The Local Names of The Country’s seem Very Similar. There is One Major Difference between Them.

At Least in My Mind, Saying The Country Name, Lithuania has a Unique Ring to It. Now, Baring in Mind, that is an Opinionated Theory. Some People get their Ears tickled by A Country Name that Another Person would wonder why. Lithuania is One that Tickles My Ear and I have no Idea Why, Perhaps just The Sound of It tickles. Of Course, There could be Another Reason Why. You See, Lithuania has A Rather Uniquely Colored National Flag. It is a Three Color Banner, sort of like Russia’s or Estonia’s where I can describe it as a Burnt Yellow on Top, A Green in The Middle, and Red on Bottom. Oc Course, This description is based on the “Hoist Side” of The Flag. A Fancy Geographical Term that means, The Right Side in which to Raise The Flag. Besides The Name and The Flag, It has One More Unique Thing. It’s Language. Lithuanian. Now, To be Fair, The Baltic Countries each have There own Languages. Estonia (EST) has Estonian, which is sort of like A Baltic Baby of a Swedish and Finnish Mixture. Latvian (LV) and Lithuanian (LT) are like A League of Their Own! Their Own Version of A Kind of Western Russian, Kind Baltic Regional, and Maybe A Little Slavic like It’s Neighbours. I would Imagine that It gets more Slavic in Lithuania (LT). A Little Part of Me thought that The Baltic Languages were more Slavic-Based and Maybe They are in Some Little Way, but like I said, They are in a League of Their Own. The More Unique, The Better! I’ll Say!

Happy Summer, My Readers! Yes, Folks! It is that Time of The Year, No, not Christmas or Halloween but, Summer Vacation Time! Time to Go on a Summer Vacation. Well, like Teachers often recommend, There could be a Lesson or Two during The Summer to Keep Our Minds Snappy and Ready for School again Next Year! Ha! I never thought that I would say that in My Life! Okay, so Lessons should be a bit less Labor or Homework-Intensive and More about Fun. In Other Words, Learning while having Fun. Just pick a Subject You want to Learn and do something Fun while Learning It! So, for Example, I have a Lesson for You! You See, I have Trouble with How Schools teach things like Geography. Now, I am of course of a Geography/History/Politics-mixed together Mind set kind of guy, so I understand. At The Time, In School, I understood Geography (or Social Studies as They called it) but, History was more difficult, only because History, The Way I was taught in School was Boring. Only because History, if It is not taught well is about The “When of It all”. As In, The Battle of 1812 was...Well, in 1812 and A brief explanation of What Happened at That Time. By The Way, The Battle of 1812 was what inspired Francis Scott Key to The Mention that “The Flag was still there” in Our National Anthem. Because amongst all of The Fighting at Night, Our National Flag, The Star-Spangled Banner at still flying at Ft. McHenry in Baltimore. See! Now, That is what I will call “Action History”. In Other Words, History that taught like an Action Movie. Now, We may have Our Own Favourite Genres of Movies but, You can’t resist a little Action in There. So, Same Thing, with Geography. To Often, Geography is where a Place is. For Example, a Country that I have recently interested in The Czech Republic or Known in English as “Czechia”, It is in what We Americans think is East Europe. So, We end up going to “Czechia” and commenting about How Beautiful Prague is for a City in Eastern Europe. You would have One Upset (or Triggered) Czech Person! First of The Czech Republic or “Czechia” (I like to refer to it as both) is actually in Central Europe NOT Eastern Europe. But, Beyond that, It makes you question more than Answers like What is Their Currency? Their Language? Anything Unique about This Country, in other words, What makes This Country special? I can answer that. Currency is The Czech Crown and Their Language is Czech. Now, It is that Last One that has recently interested me. It was Interested Me about How Many “Funky Letters” can be in a Czech Person’s Name and How do You pronounce those Letters? I had My Mom sit watching a Woman pronounce those while Eating Dinner the Other Night. She found it interesting!

Here is The Link to That Video because I know that You are Curious! (https://www.youtube.com/watch?v=Dot3LVAeABc) It also includes How to Pronounce and Say The Most “Funky” and Unique Letter in The Czech Alphabet, The Letter R with a Mark over It. It looks like This (Ř) It is said that It is Impossible to Pronounce but, It is Pronounced “Aerch” and That is in The Single Form and The Ř is Pronounced Very Differently from The Single Letter. Crazy, right? Also, “Czechia”, Which was formerly Czechoslovakia divorced with Slovakia and The Czech Republic’s Local Name was Hard to resound with English as did The Name, The Czech Republic. So, Last Year, The Leaders of The Country changed The English Name to Czechia. and, One Final Note before I move on, Czechia is also referred as Bohemia, but NOT all of Czechia is called Bohemia. There are like 4 Regions of Czechia but, The Most Important Ones are Bohemia in Northern Czechia (like Prague) and Southern Czechia (like Brno) is called Moravia. So, to Another Country, We go! Iceland! It is Locally pronounced Is (like “Niece”) Land, ìsland. Currency is The Icelandic Krona (or Crown), Capitol is Reykjavik (Try and Pronounce that City!). Iceland is known very well for It’s Natural Beauty and Of Course, Beautiful People. Now, the Iceland Letters are even more “Funky” like a “O” that looks like it has a Cross on Top. Icelandic is Very Hard Language to Learn or Pronounce! From My Research, I learned that Iceland is Very Expensive. As In 6,000 Icelandic Króna (or Close to 60 US Dollars) to go to The Blue Lagoon! Yes, Really! 60 Dollars and that is only for The Entrance and a Mud Mask, Not including a Towel, Changing Rooms, or a Drink (which they offer). That was a Blow to My Heart because I wanted to see it! But, I am told that There are Smaller and Less Tourists Hot Springs to go to in Iceland. The Weather in Iceland, which You have to be watchful of can be Very Unpredictable. and, Finally, The Last Country I will talk about, Jamaica. Jamaica is Very Interesting Country once You get past all The Tourist Points of View on This. Some Tourists say You should not Visit Jamaica because of Poverty and Crime, Just be a Little more Careful, that is All. Jamaica, I feel is a Country that Less about The Beach (I mean, It can be!) and More about The Food. Namely, The Jamaican Jerk Chicken, I am told is Spicy but, Worth It. and, Of Course, Jamaican Meat Patties. Think of It like a Jamaican Hamburger, only Better. I feel that This is One of Those Foods that You have to try at a Local Place or with a Local Person. In My Research I found that Jamaican Patties are not Very Expensive in both Jamaican Dollars or US Dollars. By The Way, Speaking of Locals, Do Ask them what kind of Music that They listen to. Sure, They listen to Bob Marley and The Like, but Believe Me, It is Much More than that. Now, Wasn’t that Fun to Learn that Stuff?! See, You can have fun learning about Something! All in All, There is a lot of Fun in Learning and A lot of Learning in Fun.

Thanks for Reading The Christianville Spirit. Have Fun in Learning Geography!

Posted by Christian at 4:27 PM No comments: