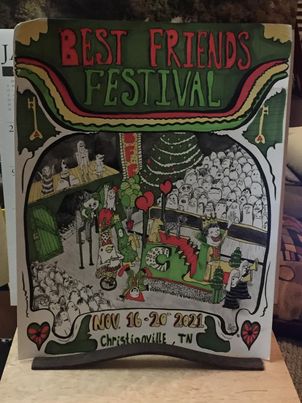 The Spirit that Moves Mountains

Happy Michael Day, My Readers! That is a Strange Greeting, You Might say! So, What is “Michael Day”?

Well, If You Know Me, You have heard about This, Every Year that They have known me. For Those who don’t know what I am talking about. I will explain.

So, Around This Time Every Year, I have a Festival from November 16th-20th called “Christian’s Best Friends’ Festival”. It is now The 17th Year of It!

What is Christian’s Best Friends’ Festival, You ask? I like to tell people that It’s My Way of thanking the friends that I have.

You See, In My Made-Up City of Christianville (Hence the name of This Newsletter and Where it is from), I have this festival in which is spread out over 5 Days, with “Days” to honor my Friends and on these days, I have a theme for them which includes the things that they like.

So, That explains The Best Friend’s Festival but, not about Michael Day. Well, to be fair, Since The Beginning of “Christian’s Best Friends’ Festival” started of The Five “Honor Person’s Days”, Two of Them have been Changed in The Past. The Days in Order are Michael Day, Brooke Day, Meredith Day, Whitney Day, and Finally, McKenna-Faith Day. I will explain in Their Meaning in My Christianville Classic. An “Honor Person’s Day” that has been changed was The Last Day of The Festival was known formerly as “Steven Day” until 2017 was re-named to Mckenna-Faith Day. Why?

Well, Long Story Short, Steven was a Friend of Mine, He was actually My Best Friend from High School. For Lack of a Better Way of Phrasing This, He was Waaay into Tigger, Yeah that Tigger, The One from Winnie and The Pooh and He sort of went into a dangerous place online and disappeared into What I refer to as “His Own World” and I have not heard from Him in a Long Time. So, I decided to Choose it to a lot more Solid Name that I would not have to Change it again. So, In 2017, I announced it on Facebook saying The Following,

“Official Announcement: Steven Day will now be McKenna-Faith Day (Honoring My Lil' PTLS Sis, McKenna and To honor My Angel Cabinet Member, Faith Thompson (Director of PTLS Family Members)” Today was The Day that in 2016, PTLS Family Member Relation, Faith Thompson passed away and I referred to The Day itself, not relating to The Festival yet as “Faith Day”. But, Then, I figured, why don’t I make a Fun Day. My Lil’ PTLS Sis’, McKenna loves Pajamas and Plus, She might as well be Family to Me, Literally and Figuratively. Like We have a lot of Similarities in Family background. Probably a Story for another Time. I digress. So, I thought Why not honor both McKenna and Faith, sounds like a Perfect Mixture! It was only been around for The Second Year and It is already My Favourite Day besides Michael Day, of Course. I mean, really, Who couldn’t resist a Christianville Metro Wide “PJ Holiday”, a “PJ Party” at The Festival, and a Pink, Purple, and PTLS Event, basically Morphing both Faith’s Color of Pink and McKenna’s of Purple and Of Course, The One thing that Makes them in Common, Potocki-Lupski Syndrome (or PTLS). Sounds a Day that People would really Enjoy! Anyway, Happy Michael Day Today and Of Course, McKenna-Faith Day on Sunday!

So, The Newsletter that is going to be made a Classic is Entitled “Best Friends’ Festival Explained”.

For You, PTLS Parents, I would like to explain how I celebrate this. First, I have it marked on all my calendars, saying either “Christian’s Best Friends‘ Festival” or the festival Name and who’s day it is. The night before, I put up “Day Markers” that tell me who’s day it is on the wall. The Morning of, I wake up and I make the announcements in my head, which is like talking on the radio, of all the festivities and the sounds that go with it (like Cheering, The Band, The Sounds of the Doors Opening as the people walk through them, The Voice of the announcer on the street, announcing “Ladies and Gentlemen...”). Again, In My Head, I listen to the Christianville Radio Station, 97.9 WPSKI (call letters meaning Potocki-LupSKI), on this Radio Station, they have a Morning Show from 7-9AM called “What’s Going On Here?!?!”, with the Tag Line, “Christianville’s News & Laugh Show”. Every Day but, Friday, they say, “Good Morning, Christianville! Today is (says Day and Date) and Here’s Your News” and on Fridays, they say in an excited way, “Gooooood Morning, Christianville!!, It’s Friiiidddayyy!”. From there, they tell you the news which includes what’s going on in the Best Friends‘ Festival.

Back to Present Day Me for Second,

For those You who really know me, You know that I celebrate the friends annually via a made-up festival in My City of Christianville. So, For Those of You who don’t, Let me explain. You See, back in 2005 around the same time The Christianville Spirit started, I also created a Festival in Christianville called Christian’s Best Friends’ Festival which I designed to be held from November 16-20 on Friends Street in Downtown Christianville. Anyway, on each day during the festival, I made the day about that person and it would be my version of honoring them. Now, I chose those dates because it was close to Thanksgiving and The Holiday Season (which is my favorite time of year) So, the first day of Christian’s Best Friends’ Festival is called Michael Day, honoring my brother. The first thing that happens, is the City of Christianville Band comes through like a parade and opens The Festival Doors, which are big Doors below the stage, and represents the festival’s opening and closing. Following that, They introduce The US Flag, Tennessee Flag, and City of Christianville Flag,

This is to Represent Christianville’s Place in Tennessee. After the City of Christianville Band has passed, They present the Friends that I made that year on the stage above the “Festival Doors”. This Year’s Friends presented includes Amy and David Taylor, JJ, Rick Garland, Pam Tate, Chris Norris, Georgette Black, Kelli (My Mom’s Boss), and Several Members of My PTLS Family. Anyway, After that comes a parade honoring my brother called “The Parade of Michael Centeno”. The next day, November 17 is Brooke Day, honoring my childhood friend, Brooke. For Brooke Day, They have a Fair called “Christian Smith-Centeno and Brooke Herrick Fair” which unlike the other days are on Friend Street. This Fair is in the city I named after her, called Brooke, which is up the road from Christianville. This Fair has ferris wheels, slides, and everything to do with Soccer. Following Brooke Day, on November 18 is Meredith Day which honors My Brothers and I’s Childhood friend, Meredith Herrick. for this day, They have a fair called “Meredith’s Fun Day”. This time, The fair is on Friends Street. This Fair has Ferris wheels, Spinning Rides, Slides, and Roller Coasters. The next day, November 19 is called Whitney Day which honors our childhood friend, Whitney Herrick. For Whitney Day, which for a lot of people in The Christianville Area is their favorite day because they have an event called “Wacky Whitney’s Play in Downtown Day” which mean they close the streets in Downtown Christianville, so people can walk all the streets and hang out. Now, if your wondering how I came up with the name, “Wacky Whitney”. Back when living at Mr. Jeff’s House (by the way, Mr. Jeff is the guy My Mom dated and was going to marry at the time) when jumping on the trampoline Whitney would be really funny and she was so funny that she called herself “Wacky Whitney” and that is how I came up with that name. The final day of the festival, November 20 is Steven Day, which is in honor of My Best Friend, Steven. For Steven Day, They close the Festival with a Parade called “The Tigger Parade” because he loves Tigger and He always will. After the Parade, they close “Festival Doors” and that’s the end of Christian’s Best Friends‘ Festival for the year. By the way, after the festival ends, Steven Day is a metro-wide holiday. All in all, Christian’s Best Friends‘ Festival is my way of honoring the friends I have and showing them I do cherish them.

Posted by Christian at 4:20 PM

Welcome to The Christianville Spirit! Your Guide to seeing through The Eyes of An Adult with Potocki-Lupski Syndrome (PTLS) known as dup.17p11.2 I believe that you will enjoy it and you will see The World through My Eyes!

Christian
Hi! My Name is Christian. I Have a Rare Chromosome Disorder known Medically as Dup.17p11.2 (Potocki-Lupski Syndrome or PTLS for Short.) I was 4th in The World and 1st in The United States to be Diagnosed with PTLS. Today I stand as the role model and inspiration of My PTLS Family. I am loved so much by My PTLS Family that I feel like I'm the Ambassador of The Family and The PTLS Union. I Love Road Signs, Maps, and Travel. I can tell you how to get alot of places. I really love Christmas because to see people happy during that time of year.