The Christianville Spirit: The 5 Types of New Years 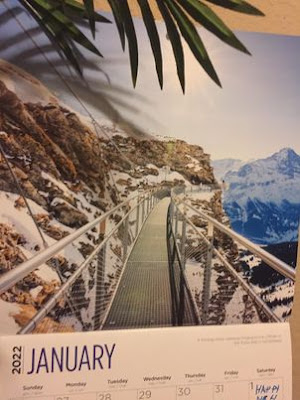 The Spirit that Moves Mountains

Greetings and Happy January, My Readers! My Greeting is actually Greetings! That is Funny! Also, although I said Happy New Year already, It is a Happy January as well. Just because You enter January by saying “Happy New Year” does not mean You cannot say “Happy January”.

So, Here is an Interesting Tidbit that I Learned! Did not You know that according to Two Calendars, We technically have not came into 2022 yet. Confusing, right? Well, It all depends on which Calendar that You are Using and The Different Types of New Years. I wrote about This back in 2014 but, There was One Type of New Years that I did not know about until Now. I listed them as The Following: Fiscal (US State Gov.), Federal (US Government), Calendar New Years (December 31st of Old Year-January 1st of New Year), and finally Chinese New Year (January 31st-February 1st).

The Calendar New Years is The One that Everyone knows. Commonly known as The “Gregorian Calendar”. In Other Words, The Calendar that is used in The Modern Day. However, There is another Calendar that People use. Now, I realize that There are Many Calendars that People use around The World. From The Jewish Calendar to The Juche Calendar, that is Only used in The Country of North Korea, by the way. However, It is Julian Calendar that I am referring to. Today is January 12th of 2020 in The Gregorian Calendar of Modern Day but, Today is December 30th of 2021 in The Julian Calendar with Tomorrow, Thursday being New Years Eve on The Julian Calendar. Basically, The Julian Calendar is the One that People were using in The Time of Jesus. In Modern Young People Speak, It is O.G of Calendars. In Other Words, The Most Original as It gets. The Thing that confuses me is that on January 31st, February 1st is not February 1st, It is February 32nd. Basically, It counts up instead of Returning back to 1 at The Start of February. At least, That is My Understanding anyway! So, Happy Julian New Year’s Eve to You! Now, I am going to let 2014 Me explain about The Calendars that I know about! Enjoy!

So, As We all Know, The Last Year of 2013 wasn’t as Good as we would have wanted it to be. 2013 started bad, middle was good, and Holiday Season felt, “Off” for some reason. Not just for Me, but a lot of People as well. Now, I know it is January of a New Year, but, Things don’t feel like They have changed, not just Me but, Everyone Else. Then, January, as I tell people is a Boring Month because There is nothing exciting happening over The Month of January and I know that for a lot of People, They are ready for February. Well, I found out about Something and then, thought of something interesting. Did you know that There are different types of New Years? There are 4 kinds and two of them are the Most Major. The 4 kinds are Fiscal (US State Gov.), Federal (US Government), Calendar New Years (December 31st of Old Year-January 1st of New Year), and finally Chinese New Year (January 31st-February 1st). I did not know about The Government New Year, but those are More Irrelevant to us Normal Americans. So, The Fiscal Year (I learned this from “LifePath”) is September 1st-August 31st, which is how The State Government pays for Their Programs. The Federal Year (I learned this during The US Government Shutdown) is October 1st-September 30th. and, Finally, The Calendar Year (Which We all Know) is January 1st-December 31st. However, The Last One are another story. Now, Normally, I would not pay attention to Chinese New Year because I only know so much about it, so It just goes over My Head and We move on to Valentines Day. But, Oh! Do I have Good News for You! You See, The Chinese Calendar names a Year after an Animal. a Dog, a Snake, a Rat, and a Horse, just to name a few. Anyway, Each of These Animals go on a rotation and Each Animal represents a Characteristic of The Year to Come as well as What Type of Luck will come your way. 2013 (Soooo Last Year!) was The Year of The Rat, hence probably Why Last Year was either Horrible for some to just “Not-as Great-as-It-should-have-been” or Okay. 2014, however, is The Year of Horse. The Horse, as We know (or should know) are a Very Gentle and Understanding Animal. They sense More things about You than You Know. They sense Your Energy and Help You Improve It. But, They are fun too! You can stroll along The Beach with them (This is a Year for Travel, They Say) and Yes, They are pretty Romantic, which The Chinese also say that, “There will be Surprise Romance.” And, also The Horses will teach you how to deal with Rises and Falls; as well to Run Off in The Sunset with Your Horse. This all Translates to “Great Successes and Triumph.” Now, The thing that is a Little Weird about Chinese New Year, or “Lunar New Year” as They call it locally, is that it doesn’t start until January 31st and goes until Valentine’s Day, respectively. Where as So Much of The World are used to The New Years counting down and watching the ball drop on New Years’ Eve. The Chinese, do their New Year a Month Later. It seem like we got all excited about The New Year of 2014 and Things are still the same in January. But, That is because I believe that, “The Year of The Horse” starts in February. In My Literal Mind, I thought that, “The Year of The Horse” started in January with The Rest of The Celebration but, I am wrong about that. So, The Good News is that, “The Year of Rat”(2013) is almost done and Ready to Begin, “The Year of The Horse”(2014) in a just a few days. So, with that said, Happy Lunar New Year! The “Year of The Horse” is going to be Awesome! So, Do you what This really means? You can start your New Years’ Resolution all over Again and That’s Good News! All in all, It is Interesting to Celebrate another Culture’s or Any Type of New Years.

Thanks for The Christianville Spirit. Celebrate Different Cultures and Learn about Them.

Posted by Christian at 4:06 PM