The Christianville Spirit: Inclusion in Graduation 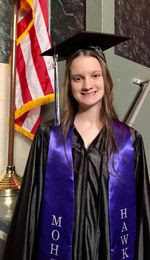 (Posted with Permission from Mother of McKenna)

Happy Graduation, My Readers! Interesting Greeting, Christian. You would say! Now, This is Not because I am Graduation but, Because I know a Few People who have Graduated. Among Them, My PTLS “Cousin”, Madelyn. She graduated from a Community College because She wanted to work in The Data Entry Section of The Medical Field. It sounds pretty easy, but it can be difficult, Just sitting at a Desk and Entering Sensitive Information about Someone. I am referring to The Data Entry, not necessarily the Sensitive Information. Anyway, A Big Congrats to Madelyn! Last Night, I watch My Lil’ PTLS Sis, McKenna graduate from High School via YouTube Live Stream. I was a Very Proud PTLS Brother watching her Graduate High School, which is a Huge Deal for Her as well as Everyone Else. You See, Graduation is a Very Important Part of Someone’s Life. It makes a Big Difference of course, if You Graduate in a Class of 2,000 (2 Thousand) or 100, or even Less. In This Case, It was a Class of Maybe 100 or less. Now, It has been a Long Time since High School for Me, but I do remember how Things work. You got the High Honors Kids, The Sports Kids (Commonly referred as “Jocks”), The Going to College and/or Military Kids, and then You have those like Me that have Special Needs. Now, If You graduate with a Class of 2 Thousand like I did, You go in Alphabetical Order. It is Easier, Faster, and You know when The Graduate that You are waiting for is coming up. Easy, right. You know that Rule about having a Last Name anywhere between N and Z, You have Long Time to Wait! However, What about if You have a Smaller Class like closer to 100 or less. Well, then It goes a Whole Different Direction! This Time they use The Aforementioned “Class Scale”, which really got me upset. In The Case of The Graduation I watched, They used that. Now, No Judging here, but Everyone worked Hard to get to This Point. Yes, Even The Smart Honor Kids! I cannot Imagine all the Hard Work and Pressure that You had to Work for to Get Here, I’m not saying that. However, For those like McKenna who have to work harder to get through School. Harder in both Physical and Emotion. For Example, I have Read that Kids with Dyslexia, for Example Work Twice as Hard to meet The Goals of Learning. For Me Personally, I worked Very Hard to Learn, Keep up Grades, and All My Fellow PTLSers as well.

I feel that She should deserve some Honor too. They honored The Smart Kids First; (Excitedly waiting!); College-bound Next; (Not in Alphabetical); Sports; and Finally, My Favourite Graduate, Second to Last. Maybe I knew that She would be Near Last when I sort of Saw her at The End of The March in The Beginning of The Ceremony. They had Two Camera Angles, so You would Two People on Either Side of The Screen. When Favourite Graduate was called, I could not see her. I think It might have been Confusion on The Ground or Bad Camera Work, One of The Two. I saw The Last Two People on Screen but, Not Her. I think I might have seen her Standing to The Left of The Last Person and Then, It was back to The Principal, before they even finished with the graduate ahead of her. I did not get to see The Moment! What is upsetting is why they would put those who have differences at the end and not give them the respect of showing them getting their pictures like the others. That makes me feel like we are not the same as the others, and that we do not make a difference. I texted her later, told her Congrats, and then, Told her about What I saw. Now, No, I did not want to be a Party Pooper. So, I let it go and told her Congrats and to Party Hardy! All In al, I am Very Proud of My all PTLS brothers and sisters who worked Extra Hard to Learn. My Lil’ PTLS Sis’, McKenna included!

Thanks for Reading The Christianville Spirit. Inclusion in Graduation

Posted by Christian at 4:31 PM