The Christianville Spirit: My Map Project 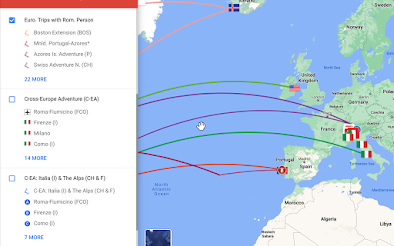 Happy April and Buongiorno, My Readers! Okay, Full Disclosure Here. Two Things, One is that Buongiorno is not spelled the Way I think it is. So, I decided to use Google Translate as The Easy Way. Because I think in My Literal Mind that It should be Spelled “Bonjourno” or maybe “Bonjuirno”. At Least, That is what It seems like to Me anyway. Secondly, This is a Greeting in Italian that means “Good Morning”. In Romance Languages, Greetings are Very Formal. I seemed to Think that It meant “Hello”. For The Record, “Ciao” is Hello in Italian.

Anyway, It is that Time of The Year, That Month that Those in My Family dread, April.

I am sure that All of You have That One Time of The Year when If Any Anything Bad is going to Happen, It is going to be in That Month. In Other Words, In Everyone’s Family, There is always that One Month of The Year that You dread it coming because You believe something crazy is going to Happen. For Some, It is Months like September (for those of 9/11), October, May, or (Hopefully Not) December. For Our Family, It seems to be April.

Anyway, I am going to Take You on a Journey into My Geographical Mind! So, There is Something that I have been working on Every Now and Then. I have actually been working on it for Several Years now. You See, On Bing Maps before I transferred to Google Maps. There was a Feature on There in which that You could Draw Lines on The Map connecting One Point to Another. As well as, Driving Directions that You could save or Send to Your Phone. It turned out that I was not using Bing Maps as often because It did not have Street View. I found out one Time that You could do The Same on Google Maps, only Much More.

I believe that It was Originally called “Google My Maps” and Now, It lists on Google Maps as “My Places”. With “Google My Places”, You can Draw Lines, Use Pinpoints, and Of Course, Driving Directions. In This Context, I call them “Trips”. Back in March (Marzo) of 2012, I took a Cyber Trip from a Waterfall Fjord to Drammen, Norway (N), Took Screenshots of Some of The Views I was seeing, and Posted them in a Photo Album of Screenshots from My Cybertrips. I think It was then, I was Inspired to do another Cybertrip out to Norway (N). This Time going from Oslo to Bergen. Along the Way to Bergen (N), I saw a Beautiful Fjord that I wanted to remember where It was. So, I created a Map on “Google My Maps” called “Favorite Places I’ve Seen and/or Want to go to” and The Idea took off from There. As Time Went on, I kept Falling in Love with The Places that I was seeing on Street View and I would add The Places as “Pinpoints” so I could remember them in Future References of Places that I would actually want to go. After Adding to The Favorite Places Maps, I was more Inspired to create More Maps. Now, I have My Maps in Several Categories.

The Following are My Maps by Name and Generally, What is on Them.

Each Map has It’s Own Reason and Theme!

“Favorite Places” is Places I have Fallen in Love with when Travelling on Street View and Would like to See Them in Real Life.

“Adventures with My Rom. Person” has The Most Mix of Everything. Pinpoints, Lines, and Trips. They range from All of My Ideas for a Honeymoon with My Rom. Person. Short for “My Forever Romantic Person”. I use that Term to mean My Future Love whether It is My Soulmate (Bridgett Lafleur, I am Led to believe her Name is), Twin Soul, Best Friend, or Life Partner. A Romantic Person covers that. I Digress. To European Trips that I have always Dreamt of doing. I thought of Doing them with My Romantic Person. Like Switzerland for Example!

“Smith Family States FC”, That is The Name of Our Family Country. This Map contains The Pinpoints of Where My Uncles Live and Until Recently, I have included where My Brother and Myself/My Mom Live.

Finally, “PTLS Union Related”, That is The Name I have given for The PTLS Family. To Explain It would be like The European Union, only “Member Countries” are PTLS Family Countries.

For Right Now It contains The PTLS Union Capitol of Houston, Texas.

Did I mention that Each Map, You can add different Layers to them. On One Layer, You have Pinpoints and Lines. Trips are The only ones that use One Layer, You can not put Pinpoints in The Driving Layer. So, I will give you Two Examples of What is on My “Adventures of My Rom. Person” Map.

One, We will call “Swiss Adventure”. Now, This Trip is One that I have always dreamt of Doing. The Flight Lines go Different Ways. The Reason being that I believe that You should always Fly The National Airline of The Place that You are Going, at Least One Time. That and, Flights between Dallas and Zurich, Switzerland (Country Code: CH) require a One-Fer, My Term for a Connection. So, I have an “Extension Line” for Both One-Fers. Swiss Air Lines, The National Airline for Switzerland flies to Boston in The North or Miami to The South. Both Require You to leave The Secure Area to Connect, Boston and Miami respectively, Do not have inter-connecting Ways between Terminals. Each One, I fly American to Boston or Miami and Connect. Connecting Concourse D to Concourse J. AlItalia (Flight Line to Roma) leaves Concourse H. In Boston, Terminal A to Terminal E. After You connect, Fly Swiss out to Zurich (CH). By The Way, In My Maps I use The Country Codes of Europe after The City Name. It is like I live There!

The Next Example, is called “Cross-Europe Adventure Pt. 1:

This One is A lot more of Detailed Trip across. We start in Roma (I). I mean Italia. Then, Head to Firenze (I) in Toscana. Tuscany for English Speakers. After passing Milano, We venture into The Alps. The Italian Alps, Swiss Alps, and French Alps. I’m talking Morterasch Glacier; Zermatt (CH); Chamonix (F); Torino (I); and, The Torino (I)-Lyon (F) Tunnel! Loads of Alpen Adventures! Heavy Mountains and Views Galore! After that, We travel to Lyon (F) to meet some PTLS Family Members. You know, If You travel all that Way, You got to! Following That, We go to Paris and See The

Tour Eiffel (Or Eiffel Tower) as well Rue Cler, Which is a Romantic Street, so I have heard. Continue North to go through The Eurotunnel and Continue up around London, to See Delphine, The PTLS Family Member that We saw back in 2015. After Seeing Her, We go up almost Liverpool (UK/GB) and then, Take The Holyhead Ferry to Dublin (IRL) Ireland. And, Finally, Go through US Pre-Clearence, which is US Border Checks before Flying a Connecting Flight to Philadelphia and then, Back to Dallas. See What I mean! Very, Very Detailed! All in all, That is a Little Glimpse into My Mind. This is The Type of Stuff that I try to teach My Mom at 2 AM in Our Talks!

Thanks for Reading The Christianville Spirit. Geography is an Amazing Things! Filled with Many Places and Many Adventures!

Posted by Christian at 5:28 PM