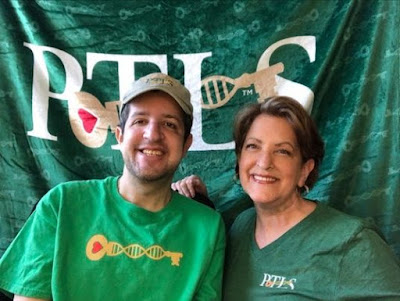 Happy May, My Readers! Whew! I am Glad that It is not April anymore! A Bit of an Editor’s Note Here, I wrote This Newsletter on Wednesday, April 28th but, I decided to release This Newsletter on May 1st because Honestly I wanted to Get Out of April. To Be Fair, I am sure that All of You have That One Time of The Year when If Any Anything Bad is going to Happen, It is going to be in That Month. In Other Words, In Everyone’s Family, There is always that One Month of The Year that You dread it coming because You believe something crazy is going to Happen. For Some, It is a Months like September (for those of 9/11), October, May, or  (Hopefully Not) December. For Our Family, It seems to be April. Nearing The End of March, We see April coming and We think “Oh No! Not Again!”, Every April, I can’t WAIT for April to be over with and Come Out of It Unharmed. So, Of Course This Month did not come without a Little “April Blues”. Honestly, With My High Anxiety that is just now under Control. Somewhat Anyway. I thought in The Back of My Mind, that Maybe April would be Nice to Me This Year! Nope. Now, The Following Event did not affect me Directly but, It did Affect My Grandma Honey. Without going into Too Much Detail, Her Dog, Cupcake had Diabetes. Has had it for a While now but, We kind of knew that It was eventually get her. Well, on April 22nd, It did get her. She had Breathing Issues and Needlessly to say, Grandma Honey did the Humane Thing and Put Her Down. So, If You see Grandma Honey out and about, Give Her a Huge Hug because She needs it. Darn April! Anyway, I digress.

So, This Newsletter, I am going to Get Real with You. Not because I want to but, Because I feel It is Necessary to Prepare My PTLS Family Members for The Future. Now, This is Something has always been at The Back of My Mind but, Most Likely on My Mom’s Mind than Anything. It is a Topic that has Floated Around in Our House and Kind of in Our Family Country in Back of Your Minds. It is Something that I don’t like to Think about, I should realize the Importance of. You See, Having Special Needs requires a lot of Planning, on Both The Person’s Part and The Parent’s Part. When The PTLSer, In This Case, is Young, It is Easy. Going to IEP Meetings in School, Going over Vacation Plans at Home, Knowing Where or What You are going to be Doing after High School just to name a Few. But, The Scariest One...What do You do when Your Mom is not on This Earth anymore. Morbid and Scary, I know! **New PTLS Family Members, Please look away from This Newsletter and Read The Intros to Myself and PTLS. They are in The Christianville Classics List! Read This when You are Ready!**

Now, Luckily, My Mom and I have a Great Relationship so, We have a Plan in Place. Guardianship. Basically, that Means that My Mom is My Guardian and She makes The Big Decisions for Me. Luckily though, We live in a State that has Something New called “Supportive Decision Making”, Basically a Less-Strict Version of Guardianship. I call it “Guardianship Lite” because My Mom does not have Full Control of Decisions but, She can help with Them. Yes, under “Guardianship Lite” She can still talk to The Doctor but, She does not Control who I get to Marry or Date. Under Guardianship, She more likely than would.

Now, Don’t Get Me Wrong, You can’t Control who You fall in Love with It. However, If You have a Sibling and for Yourself, in Case You kind of have to. Keyword here, Kind of. It is Something I call, “The Tier List”. Basically, In Guardianship, You have The Main Guardian (My Mom) and Then, You go into The “Tier List”. Basically, Ther Person who takes over as Guardian. Most of The Time, It is Best to have a Member of Your Family, like Your Brother, Aunts, Uncles, Cousins. Whoever. That Part is Fine. I have Two Tiers in Place. Now, If You choose The Immediate Family Route, You have to consider something else. Who They Date and/or Marry. Their Romantic Person.

This is Something that in The Back of My Mind, I have not considered seriously. The Family Member’s Romantic Person would basically invoke What I called “The Sub-Mom Claus”. Basically, as Scray as It sounds, that Romantic Person would be “Sub-Mom”. Now, Baring in Mind, that Absolutely NO ONE would Replace My Mom Ever! They would not take The Guardianship Role, The Family Member would. However, They would take “Sub-Mom” Role. Basically, like a Permanent Substitute Mom. We Americans shorten The Term, “Substitute” into Sub, Ergo “Sub Mom”.

Now, Of Course, in My Special Needs Logic Mind, MY Romantic Person could take the Role as “Sub-Mom” and That could be Possible as well. Less Likely though only because A Romantic Person and A Mom do not Mix. Now, Of Course, My Brother knows about All This including “The Sub-Mom Clause”. He lets Anyone He dates or Likes Him that This is in store for Them. In My Mind, that is Not really Fair to do to Him. But, Like I Said, Planning. Now, What counts as “Sub-Mom” because It can’t be just Anyone. It has to be Someone who is Very Caring, Very Patient (as us PTLSers are Very Stubborn), Someone who Take The Time to Get to Know both in Personal Way and Professional Way, Knowing My Ticks, Looks, and Idiosyncrasies. They Most Definitely have to Understand My PTLS and Most Importantly, They have to Pass The “Admission’s Exam” of Both Grandma Honey and My Mom. But, More Importantly, My Mom. She give The All Clear Signal. Not Fair and Harsh, Yes. But, Think of It from You Own Mom’s View. Or Another The Mother of a Special Needs Child/Adult’s View. If They Kind and Loving to My Brother, Naturally They are Kind to Me. Believe Me, I have heard Many of My Brother’s (Ahem....Clearing Throat) Romantic Person’s call him names. Obviously, If They are Harsh to My Brother, They would be Harsh to Me. I believe Romantics call that, “The Waiter Theory”. I can almost hear My PTLS Friend, M.P Twinee poking at Me about coming up with Another Theory! Basically, It is means that how You treat a Waiter or Waitress at a Restaurant, if How They will Treat You. It is an Odd Theory but, It works. It would help also that They live in An Area that You would not mind living in because after all, You will be Living with Them. This is Something that You don’t think about, until It happens. But, The Importance of Where They Live means a lot because I would eventually have to Move to that Location. All in all, All Things within The Family support should be Considered and Who is going to Take Care of The PTLSer and Who will Be The “Sub-Mom”.

Thanks for Reading The Christianville Spirit. Prepare for The Future with Planning. But, Don’t Focus too Much on It.